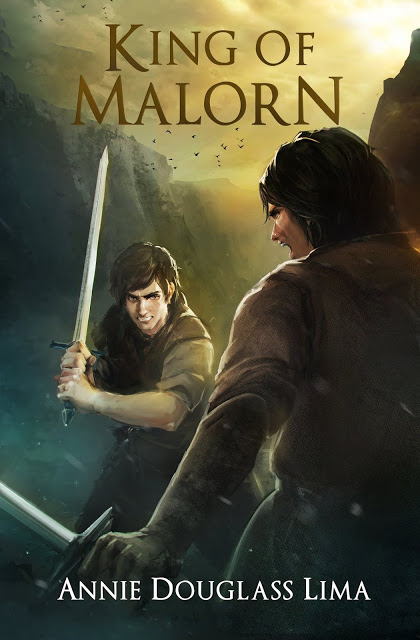 Thanks for stopping by for another new release spot light and author interview! Take a look at this brand-new fantasy adventure story with a hint of romance by author Annie Douglass Lima.
You can download a copy of the ebook for free
between July 9th and 11th!

Life as the king’s younger sister should be exciting.

Not for Princess Kalendria. She’s sick of the dissent and of constantly having her family undermined by those who think they could rule Malorn better than King Korram.
Hoping to lighten the mood in the palace, Kalendria plans a ball to celebrate her seventeenth birthday. It doesn’t hurt that their handsome Alasian ally King Jaymin has promised to attend, and she’s been waiting for him to notice her for as long as she can remember.
But unfriendly forces have their own party plans. When Kalendria, Korram, and Jaymin barely survive an assassination attempt, their only recourse is to flee into the wilderness. Tracked by unknown assassins, they must figure out whom they can trust and who is behind the plot. Can Kalendria help her brother reclaim his throne – oh, and catch Jaymin’s attention while she’s at it – before they are all killed and war destroys both kingdoms?
Click here to download your copy of King of Malorn on Amazon now!
Click here to see King of Malorn on Goodreads.

A Few Words from the Author:

Hi, Annie! How did you come up with the idea for King of Malorn?

It just flowed naturally from the earlier books in the series. The villain, Rampus, wanted to return and cause more trouble, and the main characters from all the other books wanted to come back and show where their lives are five years later. Of course, they didn’t like some of the situations I put them in, but they only have so much say in the storyline.

Can you recommend any books/authors that have inspired your style of writing?

Yes! Anne Elisabeth Stengl’s Tales of Goldstone Wood series. Besides being excellent fantasy, her series is similar to mine in that some of the books can stand on their own, and some can be read in any order (much like the first four in my Annals of Alasia).

Do you have more stories planned for this series?

Yes, at least one. I’m tentatively planning to come back to these characters after about a year has passed in their lives Erik (King Jaymin’s bodyguard) and Anya (an apprentice tailor who only has a small part in King of Malorn but starred in In the Enemy’s Service) will probably be the main characters in the next one. And of course Dannel, everyone’s favorite spy and double-agent, will be back.

One of my other books, The Collar and the Cavvarach, is about to become an audiobook. Though I’m not narrating it myself, there’s still a lot to do, like listening to each chapter as the narrator finishes it to check for any mistakes. It’s a fun project, though time consuming. We hope to have it done by the end of the summer.

If you could spend a day with one of your characters, who would it be and why? What would you do together?

I’d like to spend a day with Anya. Mostly, we’d just talk, although she’d probably sew or knit while we converse (she likes to keep her hands busy). I’d ask her to tell me about the Secret Organization she’s a part of, and what things they’ve done in the past to keep the royal family safe. And I’d get her to teach me the secret code she invented, where she can work messages that only a few people in the kingdom know how to read into a piece of handmade lace. Of course, she would probably be reluctant to discuss such confidential matters, but if she realized who I was, I’m pretty sure I could convince her.

Would you want to live in your story world? Tell us why or why not.

I would prefer not to live in Malorn. The kingdom has been having political troubles for years, beginning when Rampus, a member of the late king’s Council of Advisors, decided he wanted to sit on the throne. He gained greater and greater power through a variety of means, secretly brought about the king’s death, and managed to get himself declared regent. In a bid to build his power even more, he invaded the neighboring kingdom of Alasia and assassinated its king and queen (see The Nameless Soldier for more on what was involved with that). However, his attempts to kill both the Alasian and Malornian crown princes were unsuccessful (see Prince of Alasia and Prince of Malorn for the details). But Rampus escaped capture and spent the next five years in hiding, plotting his return to power. Now, in King of Malorn, he’s back with new plans, and they don’t bode well for the young King Korram, his sister Princess Kalendria, or their ally King Jaymin – or anyone loyal to them.

However, I would love to live in the kingdom of Alasia. Apart from the month or so of horror that was the Invasion, Alasia has had several generations of peace. Seventeen-year-old King Jaymin is well liked and has done a great deal of good for his people since being crowned after his parents’ deaths. Though not as financially well-off as Malorn (which has an abundance of gold in its mountains), Alasia is a more secure and contented kingdom. Surrounded on three sides by ocean, it has hundreds of miles of scenic coastline, as well as rolling plains and thick, tangled forest. It would be an idyllic place to live.

Just for kicks and giggles: A very large dragon invites you over for dinner…what do YOU do?

I say yes, of course … and pray that I’m not on the menu. If he has my contact information, I assume the dragon could track me down if he wanted to, so best not to offend him by saying no.

Thank you so much for stopping by today, Annie! Don’t leave yet, folks, I still have some amazing information to share about Annie’s other works and how you can follow her on social media!

King of Malorn is book 5 in the Annals of Alasia. But don’t worry if you haven’t read the others; it will still make sense on its own.

Each of the first four books can stand on its own as well. They each deal with events surrounding the same major political incident: the invasion of the kingdom of Alasia by the neighboring kingdom of Malorn.

Prince of Alasia begins on the night of the Invasion and describes what happens to twelve-year-old Prince Jaymin after he is forced to flee for his life.

In the Enemy’s Service  features a girl as the protagonist and tells the story of those who were not able to escape from the Alasian palace when the enemy invaded.

Prince of Malorn begins several months earlier and focuses on the Malornian perspective of the events leading up to the Invasion.

The Nameless Soldier shows how a young Alasian soldier lives through the Invasion but then has to survive and make a name for himself in enemy-occupied Alasia.

In each of the books, main characters from the others make brief appearances and interact with each other at the point where the time frames and settings overlap.

Annie also has a short ebook of “interviews” that she conducted with the characters in the other three books. Annals of Alasia: The Collected Interviews is not available on Amazon, but she sends a free copy to anyone who signs up for her mailing list (to receive updates when she releases new books or occasionally offers them for free).

Annie Douglass Lima considers herself fortunate to have traveled in twenty different countries and lived in four of them. A fifth-grade teacher in her “other” life, she loves reading to her students and sparking their imaginations. Her books include science fiction, fantasy, YA action and adventure novels, a puppet script, anthologies of her students’ poetry, and Bible verse coloring and activity books.
When she isn’t teaching or writing, Annie can often be found sipping spiced chai or pomegranate green tea in exotic locations, some of which exist in this world.
Author Contact Info:

One thought on “King of Malorn Blog Tour”