I am so excited to have the amazing and talented H. L. Burke here with us today to talk about her newest release, To Court a Queen. I had the honor of designing her cover for this book, and I may be biased, but I think it’s delightful, and I already know the story beneath this cover is going to be even more amazing. A few words about To Court a Queen before I invite Heidi over for a brief interview. 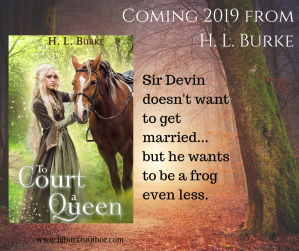 He doesn’t want to get married, but he wants to be a frog even less.

Knight errant, Devin, takes a shortcut through the woods, only to be captured by fairy forces. The fairy queen has run out of breathing males to fight for her hand, and Devin, while not ideal fairy stock, is breathing–for now.

Telling a vain fairy queen you’d rather not be her one true love is a ticket to life on a lilypad, so the knight agrees to face three challenges to win Queen Agalea’s hand. When a clever servant girl offers to help him navigate the trials in order to stop the constant bloodshed of the courtship ritual, Devin jumps at the chance. However, as he balances “flirting” with his “beloved” and overcoming tasks specifically designed to kill him, he finds his heart drawn to his new partner in survival.

Hello, H. L. Burke! So glad you could join us today. Your new book looks amazing, and I can’t wait for my copy to arrive. Let’s talk about your writing for a couple of minutes. Please tell us, how did you come up with the idea for To Court a Queen?

This is a long and twisty story. When I was a teenager I got a copy of Gail Carson Levine’s Writing Magic that had some story prompts in it. One was about a girl realizing she’s invisible. I liked the idea of this and started to write about a Cinderella-like character who realizes that she has the ability to turn invisible … then a fairy-godmother type character informs her that the reason she has this ability is that she’s half-fairy and her true parents were a knight and a fairy-woman who fell afoul of an evil queen and are being held captive by said queen, and not-really-an-orphan-after-all girl has to go and rescue them …

So I decided I needed a story behind why the evil fairy queen hated this girl’s parents so much, and I came up with essentially this story to explain it … realizing quickly that it was actually more interesting than Cinderella-girl’s story, so I put it aside for years and years and years … but for some reason I remembered it and was like, “Yeah, the parents’ back story IS more interesting than the daughter’s story. I should just write the back story.”

In the words of the immortal Weird Al, “So I did.”

I made some changes to the ending of this one, though, so now if I ever write the daughter’s story, I’d have to give her different parents (I’d explain, but that would be spoilers).

You really want to know my process? It starts with a HOLLA and ends with a Creamsicle, and if there’s time in between? THUNDERCATS!

(Sorry, I’m contractually obligated to answer that question with that Psych quote. You are not the first to fall into that trap.)

Ahem. Yes. I fell for that. Now, for our next question…Felys (the cat-elves): tell us about them!!

I’ve had “felys” in my brain since around the same time period that I came up with the idea for this book (so like high school … dang, that was a long time ago). They have fur-tufted ears, good night vision, and tiny, useless fangs. They are agile. They live in trees naturally and are kind of considered lesser by most other Fae races because they are not in possession of any great magic, have a more human lifespan, and just generally aren’t as “flashy” as say fairies or high elves.

Interesting side fact: Sevaine, my lead cat-elf/felys was originally named “Katrile” or “Katrin” depending on my mood, but I decided that was both too “spot on” for a cat-elf and maybe a little too close to Katniss (who wasn’t a thing yet when I came up with this story, but is now, so I adjusted). Instead I went with a name that was a slight play on the name of the cover designer I worked with because I think she sent me the cover at the exact moment I realized I needed to change the name, and I was like, “Sure, I’ll go with that.”

Sevaine/Savannah … I’ve heard it both ways.

Wow. Gasp. I feel so honored to have a felys kinda-sorta named after me. I bet most people don’t get to brag about that. Seriously, I’m dancing and giggling over here.

Ahem. Focus, focus…So, why do you like to write stories, Heidi?

Because forcing your friends to act out your elaborate scenarios is apparently looked down upon in most social circles.

Seriously, I was that annoying kid who if you asked me to play dolls or action figures wanted to work in a logical narrative to the whole thing, so I was always telling my friends, “And now you say…” and a lot of times they wouldn’t do what I said. So I started to go home and write out the scenarios. Since I usually still kept my friends as the characters, I’d show them the stories (I was maybe eight or nine when I started doing this). They’d give me input. They’d ask if we could go to Japan or fight a squad of evil penguins on our next adventure, and I’d comply … I got a bug for sharing stories. Doing it with royalties and Amazon distribution is a lot more efficient than carrying around a three-ring binder full of college ruled paper written on in multi-colored gel pens.

I need to finish up an epic fantasy trilogy that I started writing several years ago. It’s called Elemental Realms (first book Lands of Ash, second Call of the Waters, third will be Prisoners of the Earth … air will be involved but I didn’t want to write four books). It’s a weird mash-up. Sort of a post-apocalyptic survivors tale, sort of a family saga, sort of a more traditional epic fantasy quest to save the world tale. Book one starts with the end of a decades long elemental war that has set humans on the brink of extinction and the rest of the series is basically a family trying to survive and regain some semblance of normalcy and civilization while occasionally thwarting elemental invaders who are trying to scratch their way back to the human realm.

Wow! That sounds absolutely amazing. I can’t wait to learn more about this series. We’re almost out of time, but I have one last question for you, and it’s a really important one: A very large dragon invites you over for dinner…what do you do?

First I ask if I can bring my family … my family specifically meaning my super villain in training 7-year-old, my Majestic Tiger Beast (Bruce, my cat), and Theodore, my live-in dragon. It would be rude to go without them, and with them for back-up I would have no nerves about accepting such an invitation. Dragons love cats (I’ve written about this on more than one occasion), so with Bruce alone, I’d probably be safe, but with all three of them, we’d have quite a party.

That has to be the most original answer I’ve ever received for that particular interview question. Thank you so much for joining us today, Heidi! Best of luck for your new release!

H. L. Burke is the author of multiple fantasy novels including the Dragon and the Scholar saga and The Nyssa Glass YA Steampunk series and Coiled. She is an admirer of the whimsical, a follower of the Light, and a believer in happily ever after.

How to connect with H. L. Burke:

twitter.com/hlburkewriter (for random snarkiness and occasional book snippets)
facebook.com/hlburkewriter (for longer form random snarkiness, occasional book snippets, and #dailydragon posts where I share my favorite dragon related finds)
my website (and mailing list) for news and deals www.hlburkeauthor.com
my instagram for #TheodoretheDragon awesomness instagram.com/burkesdragons
and my reader group if you want to be the first to hear about beta and ARC reading opportunities as well as my day to day struggles and weekly live videos. https://www.facebook.com/groups/hlburkereaders/

If you’d like to visit the other stops on this blog tour, here is the complete list of awesomeness:

3 thoughts on “To Court a Queen Blog Tour”